The third research area concerns the observation, monitoring and discovery of variable stars.

This work consists in recognizing variable sources that are not yet known. In astronomical research and, in particular, in photometry studies sample stars are used, whose brightness is well known.

If, therefore, the brightness of a sample source is assumed to be constant while it actually isn’t, errors and uncertainties are introduced in the results.

The experience accumulated in photometric measurements of exoplanetary transits has been instrumental to GAL Hassin’s widening the range of its research and its devising a protocol for the detection of variable stars.

On August 9, 2020, while monitoring an exoplanetary transit, GAL Hassin discovered a new variable star, which has been named GALVAR1, located in the constellation of Andromeda, about 4500 light years from Earth.

The observation was made for five hours, producing a set of 700 30-second images, acquired with an R filter using the Galhassin Robotic Telescope 2 (GRT2, pictured below). Each white dot is a star, captured within an area of sky 40×40 arcmin in size: not much larger than the disk of the full moon. The one circled in red is the GALVAR-1 star. 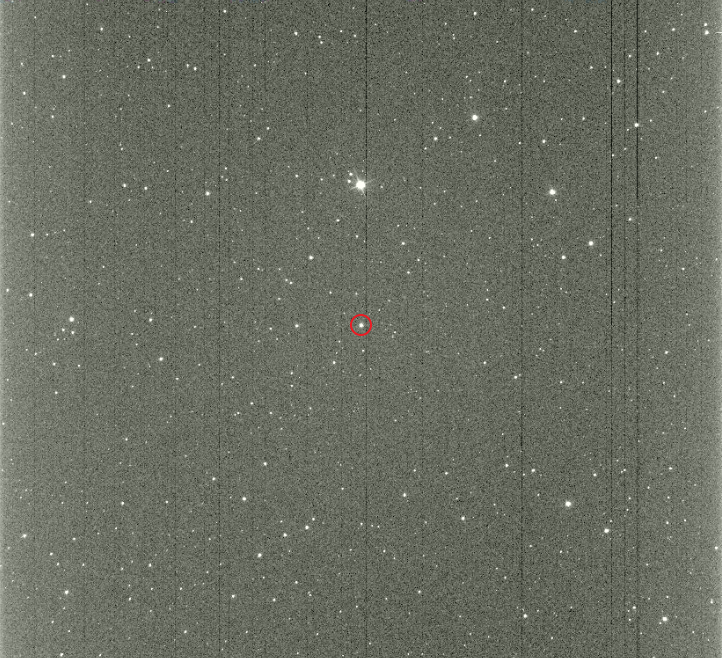 Observations of the variable star V1298 Tau (T-Tauri type) are being carried out in 2021, in order to characterize its multi-band variability during the observation by XMM-Newton Space Telescope. The observation is conducted jointly with the Multifunctional Observatory of Chianti and the Castrofilippo Observatory.

The field of view of the variable star GALVAR1 (in green), and the stars used as a comparison (in red). Credits: GAL Hassin/Alessandro Nastasi.

The study of variable stars allowed for the estimation of the distances separating our Sun from celestial bodies in faraway areas of the observable Universe, thus forever changing our vision of the Cosmos