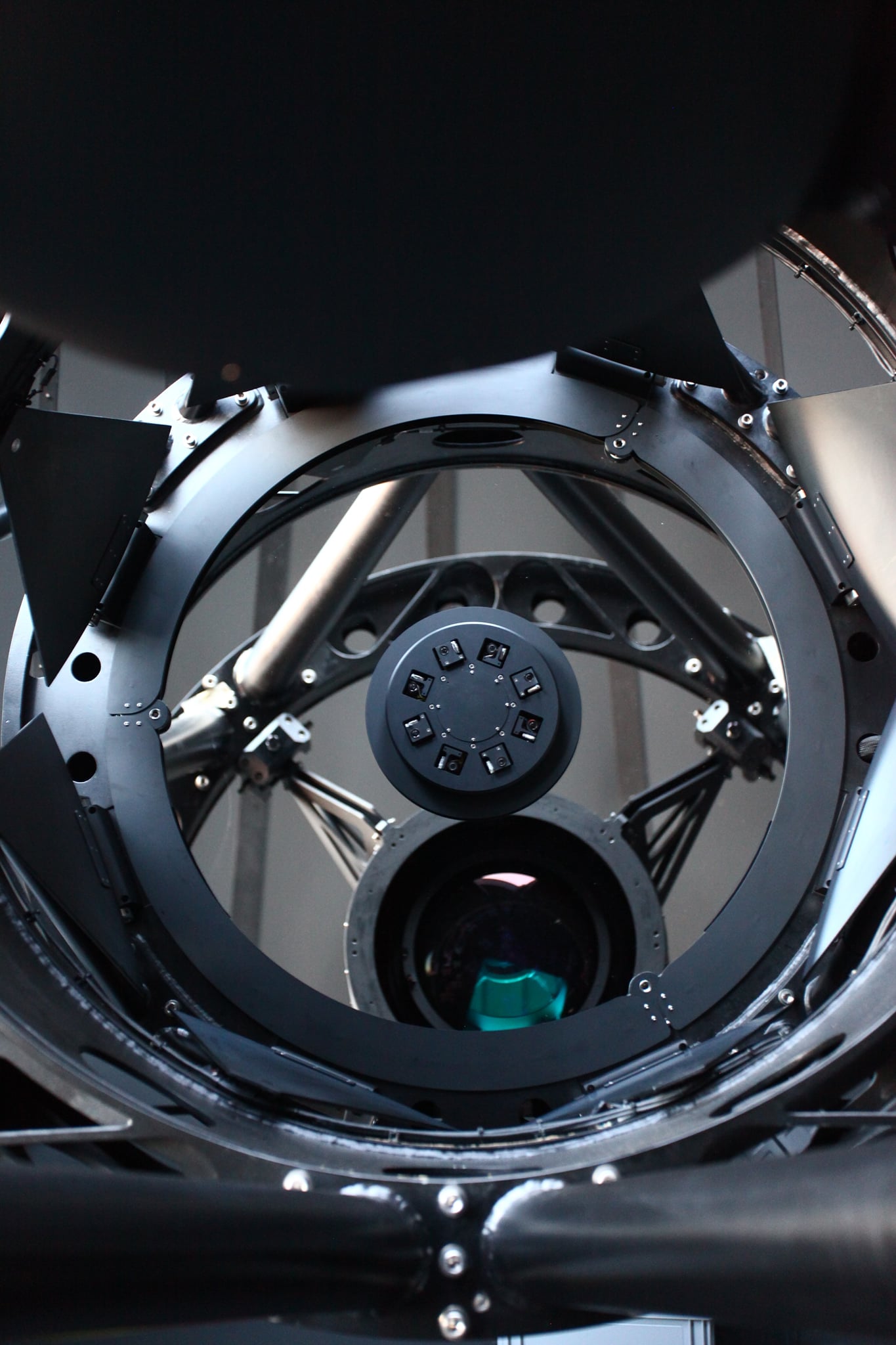 The Corrado Lamberti Astrograph and the Wide-field Mufara Telescope (WMT), the latter located on Mount Mufara (1865 meters) will become operational in the coming months.


The Galhassin Robotic Telescope 1 (GRT1) is a reflector telescope in Ritchey-Chrétien (RC) optical configuration, fast, made by Officina Stellare, with 400 mm aperture and f3.8 focal ratio and equipped with a large field of 83x83arcmin corrected thanks to the integrated leveller.

The telescope is placed on a 10 micron GM3000-HPS mount, which allows tracking with an accuracy of 1″/15 min and a maximum pointing speed of about 10°/sec.

GRT1 is currently located in a 3 m astronomical dome purchased through funds awarded by The Planetary Society (Pasadena, California), which selected GAL Hassin as one of the 2019 Shoemaker NEO Grant winners with $11,700 in funding.

Along with the dome, it was possible to purchase two devices for time synchronization of the PC clocks controlling GRT1. The entire instrumentation is fully remote and able to start, point and begin the observation of a target within 7 minutes.

The GRT1 is mainly dedicated to the confirmation and monitoring of Near Earth Objects (NEO), Trans-Neptunian Objects (TNO) and comets.

The Galhassin Robotic Telescope 2 (GRT2) became operational in early 2020, completely built on a project developed by Carmelo Falco, who is also finishing the Corrado Lamberti Astrograph. It will become operational at GAL Hassin in 2021.

The optical configuration Ritchey-Chrétien is a standard configuration; the primary mirror is parabolic with a focal f/8 much longer than conventional. This allowed the instrument to operate without correctors. The GRT2 is equipped with a camera of absolute excellence with a CCD sensor KAF-16803, 36.9mm x 36.9mm.

The Wide-field Mufara Telscope (WMT) is the future of research at GAL Hassin.

It is a 1-meter wide-field telescope, a world prototype for this kind of observational instrument. Its location on the top of Mount Mufara, at 1865 meters of altitude, makes it even more special, giving it the record of highest observatory in Italy.

The low latitude and high elevation of the site will offer an unique position for the study of a region of sky up to DEC ~ -40° declinations – usually inaccessible to the telescopes of the northern hemisphere – and of the Galactic Center. This region is full of stars and energetic events of great astrophysical interest. Among them, the supermassive black hole of 4 million times the mass of our Sun.

The WMT is a unique and versatile instrument, suitable for multiple research activities: from the discovery of asteroids potentially dangerous for the Earth to the tracking of large and medium-sized space debris, from the detection of optical counterparts of gravitational waves to the discovery and characterization of exoplanets through the method of transits, from the detection and photometric follow-up of novae events to the study of galactic and extragalactic variable sources.
Objects and phenomena completely different, but all “transient events”, i.e. characterized by rapid changes in position or brightness. Variations that the WMT is able to capture thanks to its wide- field of observation, as large as 25 full moons.

The WMT will also be an excellent tool for the immediate confirmation of the detections provided by the future NEOSTED telescope (also called FlyEye) of the European Space Agency (ESA), which will be located at a short distance from the WMT, on Mount Mufara, within the next 5 years.

1-meter wide-field telescope, world prototype for this type of observational instrument. The Telescope was placed on the summit of Mount Mufara in September-October 2020, Credits: Officina Stellare/GAL Hassin

The WMT will make fundamental contributions to the study of asteroids potentially hazardous for the Earth. Other key science areas include the study of the monitoring of large and medium-sized space debris, the detection of optical counterparts of gravitational waves, the discovery and characterization of exoplanets through the method of transits, the detection and photometric follow-up of novae events and the study of galactic and extragalactic variable sources.

Commissioning and first tests of the Wide-field Mufara Telescope.
The time between first light and science operation is used to verify, quantify, qualify and optimize the functionality and performance of the telescopes and their instruments.
Credits: Officina Stellare/GAL Hassin/Alessandro Nastasi

Waiting for watching the Universe

In the reign of the WMT telescope

The dome housing the WMT telescope is visible on top of Mount Mufara. Credits: GAL Hassin/Alessandro Nastasi and Carmelo Falco

Made by Officina Stellare (Thiene, Vicenza).

The dome housing the big telescope is 3m in diameter

GRT1 is mainly used to the confirmation and monitoring of Near Earth Objects (NEOs), Trans-Neptunian Objects (TNOs) and comets, but has also allowed different exoplanetary transits for the ExoClock project.

The 3 m dome houses the GRT1 Telescope. It was purchased thanks to funds awarded by the Planetary Society, Pasadena (California). GAL Hassin was selected as one of the winners of the 2019 Shoemaker NEO Grant. Credits: GAL Hassin/Sabrina Masiero

The Galhassin Robotic Telescope 2 (GRT2) went into operation in early 2020, fully realized on a project developed by Carmelo Falco.

Accommodated in the Observation Terrace of GAL Hassin.

GRT2 in the Observation Terrace

GRT2 is currently housed in the Observational Terrace along with a dozen observational instruments, including a radio telescope. GRT2 is visible in the left file as the last instrument. Credits: GAL Hassin/Salvatore Virga

There are currently no telescopes in the European continent – either in the works or even under consideration for the near future – with the characteristics of the telescope that will be installed on Mount Mufara, specifications that make it particularly suitable for the task of detecting and tracking Near-Earth asteroids. Its location in the center of a large continental area with no other comparable facilities ensures that this telescope will play an important and central role in this activity.